Health care practitioners must be equipped with multitarget interventions that are able to modify molecular networks that play a key role in disease progression.

The simulation of the evolution of health-to-disease processes can be used to predict the response of a whole inflammatory/wound-healing network, rather than the response of particular inflammatory mediators. Given the importance of the inflammation process to the BrSM approach, the potential to identify and monitor inflammatory network states may provide valuable diagnostic entry points for assessing a patient’s autoregulatory network. Diagnostic technological platforms such as lipidomics, metabolomics, genomics and proteomics are essential for capturing relevant biological information at the level of detail necessary to detect and diagnose more comprehensively.

A patient’s stage of disease progression is classified within a disease-health continuum using patient history, physical examination, and laboratory parameters including molecular diagnostic techniques. A patient can be diagnosed in accordance with phases of disease progression, treated at multiple therapeutic access points, and monitored in terms of how networks of pathophysiological processes resolve to a state of health. The ability to identify disease stages with resolution at the gene expression level will provide the clinician with a more complex and accurate picture of multifactorial, chronic disease. Given the current healthcare and medical challenges, the single-molecule, single-target paradigm does not provide the specificity and sophistication that a multitarget, multicomponent model demonstrates. New medications and treatment protocols are warranted to target and bioregulate perturbed autoregulatory networks toward resolution. 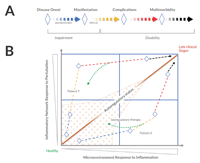 Disease progression is commonly understood as the worsening of a disease over time. In 1980, the World Health Organization published the International Classification of Impairments, Disabilities and Handicaps (ICIDH) with the objective of providing a widely accepted structure of the consequences of disease and their implications for the lives of patients. Expanding on this model, this figure presents a conceptualization of patient autoregulatory status.

A. The concept of disease progression, adapted from the 1980 WHO ICIDH model. Blue-to-black colors indicate the stages in which a given disease is progressing, and depicts principal milestones between stages. The dashed line indicates that there is no strict sequential order between stages or milestones. A linear structure is used for simplicity.

B. A schematic conceptualization of disease progression as a four-quadrant map (using the BrSM model as a framework, disease progression is considered as the Patient’s Health-Disease Continuum). The arrowed and dashed lines represent the hypothetical disease progression of patients X and Y. In contrast to a more simplified, linear approach of identifying disease stages in clinical decision-making, this map positions stages in relation to dysregulation parameters represented by the horizontal and vertical axes. The therapeutic strategy proposed by the BrSM model proposes that a therapeutic effort is focused on “moving” a patient’s autoregulatory status (represented by the green dashed arrows) to a state of more favorable autoregulation capacity. For more details, please refer to the White Paper.